The Hunley Group Blog: Building Product Manufacturers – Put yourself in the master spec with the right architects

Put yourself in the master spec with the right architects

Chasing specifications is an elbow-grease necessary part of the game in the world of commercial construction.  But it is tres laborious and time-consuming. And if you’ve got to try to get into a spec from the start, or flip a competitor’s spec, it’s pretty inefficient.

So how do you get in there, to begin with?  Ah, right. The master specification. Now maybe you can get listed in MasterSpec or SpecLink and hope to pick up a whole slew of projects.  But a great many shops – particularly the big houses like Gensler, HKS, SOM, and HOK – don’t use a third party; they write their own.

Well, You can boil the ocean and go after every architect out there and seek to get listed.  There are only 20,000 architectural firms in the US; you should be able to knock that out by next quarter, right?

If only there were a better way.

You could use an ENR list to pick the biggest, or SpecShare to pick the architects who are listing the most specs that list your product.

Get those firms loaded to the CRM, and flag them as top priority firms.  Assign them to the appropriate territory manager, then track the calls they’re placing on those key firms.

Next, let’s leverage a database you’ve built over time to keep targeting

A one-time list-build is a great starting place.  But that list will change over time, and it’s a pain to keep bulk-updating it.

If you’re using the CRM to capture projects and identify specified products, you’re building a database of places where only the competitor is listed.  Each time that happens, you’re surfacing an architect who’s gone to the dark side.

Track the architects who have issued the most specs listing only the bad guys, and you have a darned fine way to prioritize sales efforts to pluck low-hanging fruit. 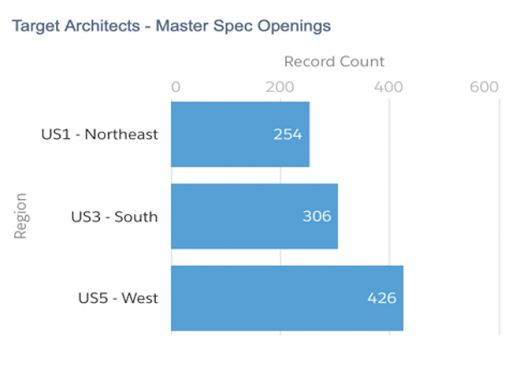 Finally, let’s grab the optimal time to make that call

The average construction project incorporates somewhere between 3,000 to 5,000 different products.  If you were an architect, would you want to just randomly talk to any sales rep about their products?  How about when you’re working on a relevant project that incorporates that particular project category?

If you’re leveraging a system of project tracking, whenever the CRM pops a spec up that lists only your competitors, that’s a pretty optimal time to make an outreach to that architectural firm.  First, you want to chase a substitution request to get a bite at that apple. But secondly, you’d like to make that the time to review the master specification. And finally, that’s probably a pretty good opening to schedule a lunch and learn to try to educate the whole firm.

About the Author: Aaron Ayer

Aaron Ayer, founder of The Hunley Group, has built multiple marketing organizations as a chief marketing officer. His entrepreneurial, yet analytical, management principles offer fresh value to growth stage small companies and Fortune 500 businesses alike. Prior to founding The Hunley Group in 2010, Aaron had served as head of marketing for Hycrete, a CleanTech company funded by Mohr-Davidow and Rockport Capital. He came to Hycrete from a similar role at StrionAir, a building products company held by Carlyle Group, when it was sold to United Technologies / Carrier Corporation. He began his professional career as a nuclear submarine officer in the US Navy. Aaron received an MBA from Harvard Business School and holds a BS in Electrical Engineering from the University of Missouri – Rolla. He is a registered Professional Engineer and a US Green Building Council LEED Accredited Professional. An expert in CRM implementations and applications, Aaron has been a Salesforce.com consultant for over 10 years, including 6 Salesforce.com certifications.